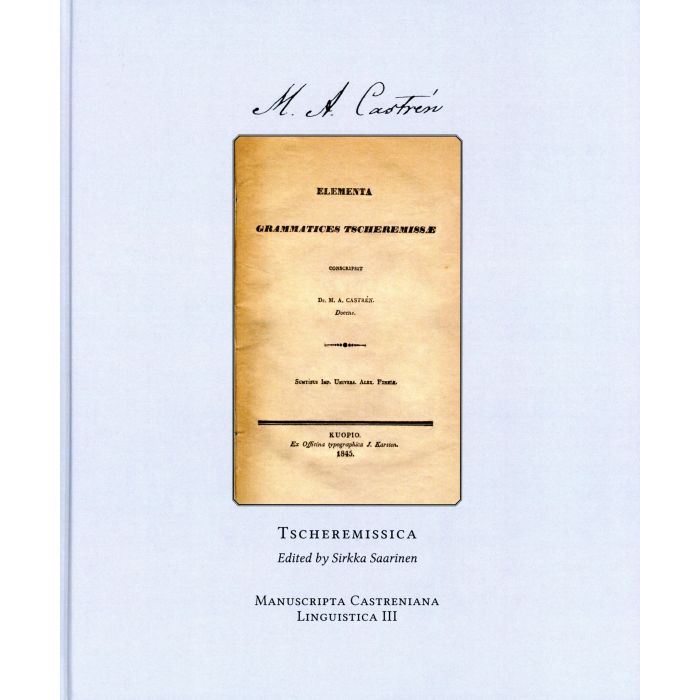 Hoppa till början av bildgalleriet
Detaljer
Matthias Alexander Castrén (1813-1852) was by far the most significant Finnish linguist of the 19th century. Not only was he a linguist but also a multidisciplinary scholar, equally versatile in the fields of ethnography, folklore, mythology, archaeology, history, and human geography. Castrén collected a huge corpus of field data during his prolonged expeditions to Karelia, Lapland, Arctic Russia, and Siberia between 1838 and 1849. His aim was to find the original homeland of the Finns, and he approached this question with the help of linguistics, comparative mythology, archaeology, and history. During his brief tenure in academia, Castrén had little opportunity to synthesize his collections, a situation aggravated by his rapidly progressing and ultimately fatal illness. Therefore, a major part of his scholarly legacy remained unpublished at the time of his death.

The Mari or Cheremis grammar is one of the few materials Castrén was able to publish himself. He began work on it in Helsinki in late 1844. Castrén's primary sources were two grammars published in Russia in 1775 and 1837, and some religious texts. At that time, the majority of the existing Mari texts were written in Hill Mari, i.e. in the Western dialect of Mari, whose speakers constitute a small minority of the Mari people. Castrén discovered that there was a Mari soldier serving in the Russian troops in Helsinki. The Mari in question, whose identity is unknown, did not know Russian or any other languages, so working with him was difficult. Castrén concentrated on the study of Mari for some weeks. He was soon to set off on a second expedition, which would take him to Siberia. The itinerary included passing through Kazan' . Since Mari settlements were located in the Kazan' area, Castrén planned on improving the grammar manuscript there.

Castrén arrived in Kazan' on 10th April 1845. It was, however, difficult to find Maris in Kazan', because they mainly lived in the countryside. At last, a young native Mari working as a clerk was found. He proved to be witty and brisk, so the work started going fast. There is no definite information about the name of this informant either, but, in the manuscript, there is a note "Cheremis from the Governorate of Kazan', Kusma Jemjänskij, Bolšoj Junjskoj (Ƃoлшее-Юнь[ин]cкий) Uezd". This is assumed to have been the language informant.

Castrén sent the ready grammar manuscript to Finland in early May and continued his journey to Siberia. The Elementa grammatices Tscheremissæ grammar, dated 1st May 1845, Kazan', appeared in the autumn of 1845 in Helsinki. The book consists of a sketchy grammar and a wordlist of approx. 700 words. This critical edition of Elementa grammatices Tscheremissæ is a translation from the Latin into English with editor's comments.
Mer information
Recensioner
Write Your Own Review
Only registered users can write reviews. Please Sign in or create an account
Copyright © Vetenskapliga samfundens delegation.