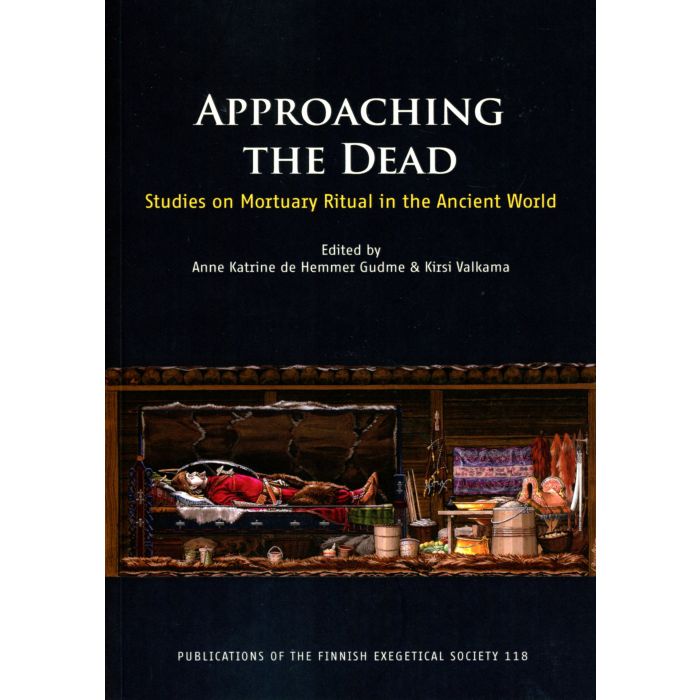 Skip to the beginning of the images gallery
Yksityiskohdat
The volume Approaching the Dead: Studies on Mortuary Ritual in the Ancient World is about the social interaction of the living with the dead, as reflected in the textual and archaeological records of ancient societies. The authors examine different aspects of mortuary ritual practices, their praxis, pragmatism, palpability, and politics. The examples cover a variety of places and historical periods, from the Late Bronze Age city of Ugarit in modern-day Syria to Late Iron Age Scandinavia. The majority of the studies, however, are focused on mortuary culture in the Levant in the long first millennium BCE.

Even beyond death, the dead play an import part in the lives of the living. The memories of the deceased leave traces in the minds of their fellow humans, in their behavior, the built environment, and material culture. Ironically, these efforts are directed at absent beings – the objects of this intense attention are ultimately dead and gone. Indeed, their departure from this life and the lived reality is the condition that triggers a flurry of activity and responses, a chain of mourning, practices of remembrance, and monumentalizing. Much of this activity can be categorized as mortuary ritual, a diverse set of strategic practices that aim at addressing the death of an individual and negotiating the personal, philosophical, and social challenges that this death creates.

“This is a small but interesting and well-designed interdisciplinary collection of seven studies on mortuary practices based on archaeological and textual sources. The evidence is mainly drawn from the ancient Near East, from the Late Bronze through the Roman period, but the volume also includes a contribution discussing a 5th century CE grave in Sweden that fits perfectly with the methodological scope of the collection. The studies consist of illustrative case studies of ancient mortuary practices, which are approached from a variety of theoretical and methodological perspectives and thus serve to update the study of mortuary rituals and practices, especially with regard to theory and source criticism.” –Professor Martti Nissinen, University of Helsinki
Lisätietoja
Arvostelut
Write Your Own Review
Vain rekisteröityneet käyttäjät voivat kirjoittaa arvosteluja. Ole hyvä ja Kirjaudu sisään tai Luo tili
Copyright © Tieteellisten seurain valtuuskunta